The presence of the Douglas Cannon in Wesleyan lore has its origins in student celebrations of the mid-nineteenth century. During this period, college was in term for the Fourth of July, and a student-led volley of cannon fire was often included in the celebrations. In 1859, Wesleyan’s calendar was altered so that the college was not in session during the Fourth, so an expanded set of patriotic exercises, including the firing of cannon volleys, was added to the celebration of George Washington’s birthday on February 22.

Washington’s birthday celebrations grew in size to become major campus events by the late 1800s, replete with a banquet, orations, and a “cannon scrap” before the official festivities. The cannon scrap came about when the task of firing the cannon volleys on the early morning hours of February 22 was given to the freshman class. By 1867, an interclass rivalry developed as the sophomores repeatedly attempted to foil the frosh efforts to fire the cannon. These events grew more elaborate, and dangerous, with each passing year as the event turned into an interclass contest. A heavily-packed cannon charge shattered most of the library’s windows in 1869 (at that time Rich Hall, which is now the ’92 Theater, housed the library), and the occasional injury was not uncommon. After the library incident, the faculty prohibited the firing of cannon on campus, though the scraps continued in Middletown, within earshot of the campus, until 1893.

Advertising sign from the W. & B. Douglas Company (“The Douglas Pump Works”), owners of the cannon after the Douglas Battery, ca. 1890. 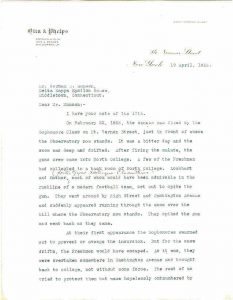 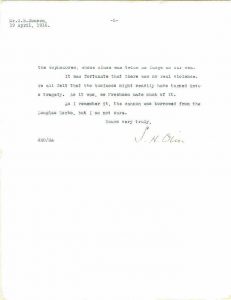 Stephen Henry Olin ’66, president of the Board of Trustees, recalling his freshman cannon scrap in a letter of April 19, 1916.

Class of ’95 broadside celebrating their victory over the sophomores, 1892.

The first cannons used for these events were leftovers from the days of Captain Partridge’s American Literary, Scientific and Military Academy, which was located on the campus before Wesleyan was founded. The Douglas Cannon, 29 1/2 inches long, 5 1/4 inches in diameter, made of brass and weighing 140 pounds, was commissioned for the Douglas Battery, a Middletown artillery regiment named after a Middletown mayor, Benjamin Douglas. It was borrowed new from the Battery and first used in the 1867 cannon scrap. From then on, the Douglas Cannon was used in the majority of cannon scraps. It came permanently to Wesleyan as a gift from the W. & B. Douglas Company in Middletown at the turn of the century.

The Douglas Cannon was stolen and sunk in the Connecticut River in 1880 by the sophomores; they later were forced (under threat of a lawsuit) to hire a diver to recover the cannon and return it to its owner. In 1893, the cannon scrap was held on campus, a tradition which was to continue until 1916, when the scraps were discontinued by a near-unanimous vote of the college body. In these later events, the sophomores attempted not only to prevent the frosh from firing the cannon, but to steal it from them as well. Increasingly complex maneuvers and tricks were devised by both sides. The most elaborate ones involved over 100 participants and a combination of multiple decoy cannons, kidnappings, signal fires, wire barricades, snow forts, trip wires, electric buzzers, and the Middletown Fire Department, who turned their hoses on the sophomore crowds in 1905.

Excerpts from an article about the Wesleyan cannon scrap written by Paul Nixon ’04 for the London-based The Wide World Magazine, October 1906.

Photo of alumni gathered around the Douglas Cannon at Reunion, 1914.